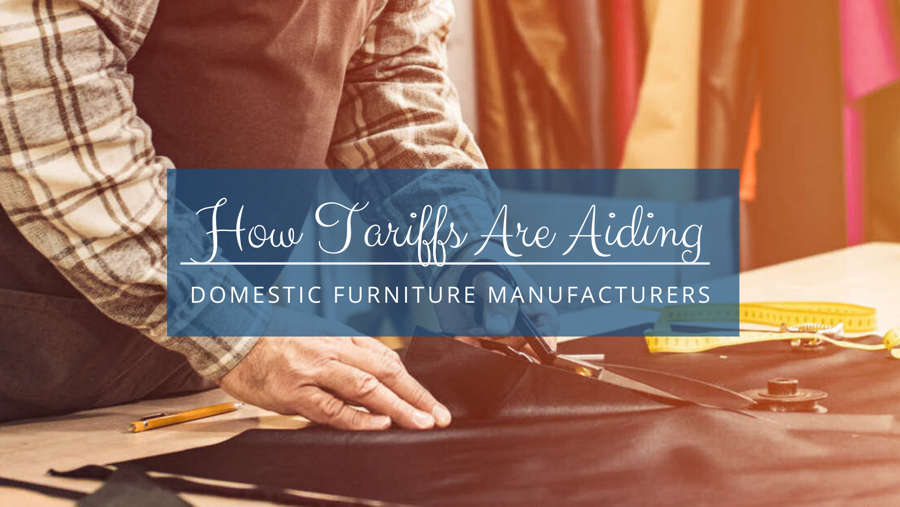 The United States-China trade war has been a subject of criticism and debate since early 2018.

While there have been winners and losers on both sides, the trade war has shaken several industries, including furniture retailers and manufacturers.

With the cost of China-imported upholstered furniture and materials on the rise, retailers have taken a second look at their supplier options. This means more demand for domestic furniture manufacturers as the price gap between “made in America” and “made in China” lessens.

As an added bonus, purchasing furniture made in America aids the national economy, boosts the number of jobs domestic manufacturers provide, and more.

The U.S.-China tariff war has caused a dramatic shift in multiple industries.

Domestic furniture manufacturers have come out ahead in the wake of tariffs on China-imported goods. As more retailers look to local manufacturers and suppliers, the demand for American made products has risen while the price gap between China and U.S. furniture pieces has begun to decline.

1. The Cost of Domestic vs. Imported Furniture

The cost of leather furniture (and all other types of upholstery) is determined by several factors. One notable factor is where the material or furniture piece originates from.

A considerable amount of the furniture industry is imported from other countries, including China. Tariffs on China have significantly impacted the expenses retailers must pay to import goods from the country. Many retailers have felt forced to pass these costs onto their customers.

As the cost of imported furniture goods continues to rise, the price gap between domestic and foreign furniture has diminished considerably.

What does this mean for the average consumer? American made furniture is becoming more accessible to more buyers.

2. Reshaping the Approach to Domestic Resources

U.S. retailers have begun to look elsewhere for furniture products and supplies. While other countries are considered by many retailers within the states, the demand for domestic furniture manufacturers has exploded!

This means economic growth in America and employment opportunities to meet the increasing demand.

United Furniture Industries has increased its workforce by up to 500 employees alone — a 14.3 percent boost. Other furniture giants have already begun to follow suit.

3. An Increase in Value

A high number of furniture manufacturers have started developing new programs and incentives to increase their value with their customers.

In addition to new techniques and offerings, the shrinking pricing gap has made American made furniture more affordable than ever.

This equals an even more considerable increase in the workforce as well as smoother, more efficient operations.

While customization options generally take longer to receive, sales for custom furniture has seen a significant spike since the tariffs began.

Domestic furniture manufacturers are expanding due to significant demand, faster services, and closing cost-related disparities between domestic and imported goods.

This translates into significant benefits to consumers who are engaging in purchasing new furniture made in America.

Not only consumers able to more readily afford high-ticket items, but these pieces are generally of higher quality, many of which can be customized to a buyer’s liking!

We accept checks and all major cards.